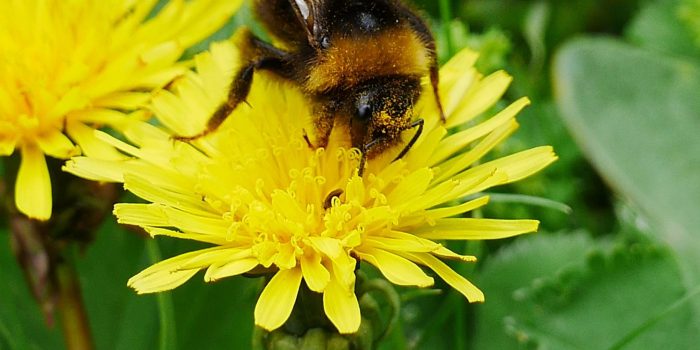 The bumblebee – seemingly innocuous as it is – has recently found itself at the centre of a substantial media hype in the U.S. The ‘rusty-patched’ bumblebee has decreased in population by a staggering 90% in the past 20 years, and as of January the 11th 2017, was ruled an endangered species by the U.S. Fish and Wildlife Service.  This is the first appearance of a bumblebee species on the endangered species list in our history.

As you may know, bees are vital pollinators of crops and wildflowers. Bee visitations also enhance crop yields and plant species diversity. But in the U.K. alone, of the 25 bumblebee species recorded in the early 1900s, almost all of these are thought to have declined in range or abundance, and three of these species have since become extinct.

The primary cause behind these population decreases is widely believed to be agricultural intensification of the 20th century.  Whilst agricultural intensification has allowed significant increases in food production, it has resulted in the reduced abundance of wildflowers and the increased use of pesticides that can directly or indirectly cause bee mortality.  Bumblebees rely on flowers as a food-source, and it is estimated that 97% of flower-rich grassland has been lost in the U.K. since the 1930s. In addition to these changes to agricultural systems and the habitat loss, reductions in beekeeping and the spread of disease are also contributing factors to the population decline.

But it gets even more worrying. A decline in pollinators is a global issue, and not restricted to bees. A recent study supported by the U.N. reported around 40% of insect pollinator species globally to be facing extinction. This raises serious concerns for worldwide food security because around 75% of crop plants depend on cross-pollination. Through their pollination of commercial crops, insects are estimated to contribute over £600 million per annum to the UK economy alone, and it has been estimated that it would cost the UK £1.8 billion per annum to pollinate crops artificially.

As pollination networks decline, there are a range of problems that may arise.
1) From an economic perspective, the cost of food production is likely to rise due to the fall in crop fertilisation.

2) Significant decreases to wildflower populations and biodiversity are also predicted, again due to the high number of wildflowers dependant on bee pollination.

3) The population and diversity of these plant species often form the base of complex food chains, disruption to which has the potential to cause staggering effects moving up the chain to bird and mammal species.
4) Aside from their economic and ecological value, bumblebees are valued culturally as a beautiful and very diverse group of animals, and appreciated as part of nature.

In November 2014, the UK’s Department for Environment, Food and Rural Affairs published a national pollinator strategy for bees and other pollinators. It set out a 10-year plan to target the decline in pollinators and to improve public knowledge with regards to their ecosystem service and conservation strategies. This included a focus on supporting pollinators on farmlands, which constitutes around three-quarters of the land in England. Attempts to incentivise farms to adopt vital measures are based around developing a series of informative and communicative pollinator events on farms, and to secure a commitment from farm-consultancies to concentrate a larger focus on bee needs. The Common Agricultural Policy (CAP) is also now subsidising farmers to manage their land in wildlife-friendly ways, aiming to work with farmers to support pollinators.

Moreover, as of 2015, the CAP also included mandatory greening measures, that specify that Ecological Focus Areas (EFA) should be applied to 5% of arable land. EFAs can be formed of nitrogen-fixing crops, hedges, buffer strips, fallow land or catch crops. Most importantly, farmers can choose which of these options they prefer for their land, and which they find most conducive to pollination. There are also non-mandatory guidelines to support bumblebees including; the reduced cutting of hedgerows to encourage flowering and the sowing of pollen, and the planting of nectar-rich wildflowers on fallow land or buffer strips to increase the habitats and food available for bees.

Current research and feedback highlights farmland owners are in need of more advice and information on why bees and other pollinators are important to their crops, and how best to support them in farm practice. In addition, a number of practices known to be beneficial to bees and other pollinators are not currently supported in U.K. government farming policies, including the promotion of mixed cropping systems and agroforestry (where crops are combined with forestry or orchard production). These are basic practices that increase the presence and diversity of flowers and bee habitats available.

Moreover, disease continues to be a contributing factor to bumblebee population declines. A governmental Bee Health Programme exists to develop research into pest control and good management structures. However, diseases in wild bees are difficult to map and treat, and a significant concern among current beekeepers is a need for more effective treatments against bee pathogens.

There are increasing bodies of evidence behind the detrimental effects to bee caused by pesticides, particularly neonicotinoid based products. Changes to the pesticide management laws and increased encouragement towards non-chemical alternatives could aid prevent continued rises in the use of these toxic repellents. Additionally, more sensitive planning permission and development proposals could help reduce the economical and environmental costs to wildlife.

There are also a series of non-mandatory, individual measures we could all take to try and support bumblebees. These include:

1) plant a variety of native flowers that will bloom throughout the year,
2) decrease home pesticide use,
3) avoid interfering with bee nests
4) leave gardens uncut after summer as a habitat for overwintering bees.

Please help to fight the ‘plight of the bumblebee’!

For more information or to help in bee survey work, visit the Bumblebee Conservation Trust website.