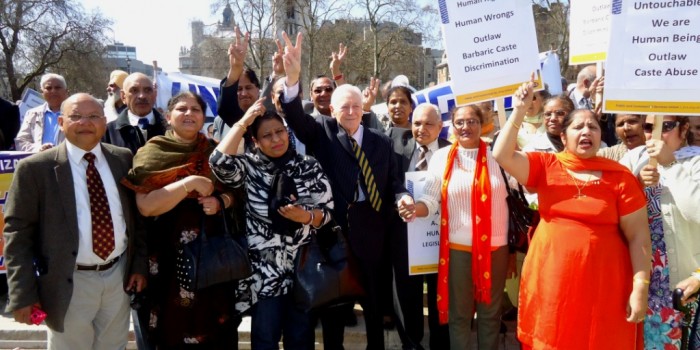 The caste system is alive and well in some British Asian communities. Can or should we fight caste discrimination in the United Kingdom?

Defined as ‘a hereditary, endogamous community associated with a traditional occupation and ranked accordingly on a perceived scale of ritual purity’, caste has divided South Asian society along commercial, social, and personal levels for centuries. Low-status castes such as Dalits – pejoratively described as untouchables – have traditionally been excluded from many positions in society, whilst those from higher castes have been disproportionately successful. Whilst affirmative action and quotas have helped to alter this in recent years, rural areas in particular still suffer from strict caste rules, from where you can work, to whom you can talk to. In extreme cases in India, rigid caste division has culminated in honour killings – and in a recent case in West Bengal, an ‘honour rape’ – over fraternization between castes.

To put the potential scale of the matter into perspective, of the roughly 5 million British South Asians, 500,000 are Dalits. The road to adding caste discrimination to the Equality Act 2010 has been long: in April 2013, after two defeats in the House of Lords, the government yielded to activists’ calls for caste discrimination to be given equal gravity as racism, sexism and homophobia. In July, however, the department for Culture, Media and Sport announced that consultation and legislation would last until summer 2015. Whilst pro-legislation campaigners voiced disappointment, the government’s decision to pursue an in-depth report, and to educate to groups from across Britain, is highly prudent.

Perhaps surprisingly, the report found that caste sometimes provided benefits. For new arrivals to the UK, caste communities offered shared cultural, linguistic and religious values and traditions. Claims that the caste system is dying out, on the other hand, were not substantiated. Caste differences were found to be existent in the UK, even amongst younger generations. Furthermore, interviews did suggest that caste discrimination was a significant issue. Interviewees claimed they suffered discrimination in the work place, including verbal abuse or being passed over for promotion; others allege that their family members were neglected in care homes or other service scenarios. Perhaps the most worrying symptoms surrounded education: children being ostracised, bullied and threatened, simply for the jobs that their ancestors used to carry out in countries over 3000 miles away.

Diagnosing caste as the problem is often difficult due to links to other types of discrimination. There is religious discrimination between members of the Indian subcontinent; there is nepotism, with a culture of hereditary promotion; there is plain-old classism, based around a distaste for the poor. At its heart, the issue often lay in explaining a confusing system to those outside of it. In several case studies, complaints to authorities were not addressed simply because the issue was not understood. Attempts to speak to perpetrators often lead to severe escalation, sometimes driving victims to take the law into their own hands. Those demanding legislation alone fail to see that it would be a limited improvement on the current situation.

Caste-Away? Should caste discrimination amongst British Asians be treated like other forms of discrimination? oxpolicy.co.uk/2014/02/05/cas…

About 4 hours ago from OxPolicy's Twitter · reply · retweet · favorite