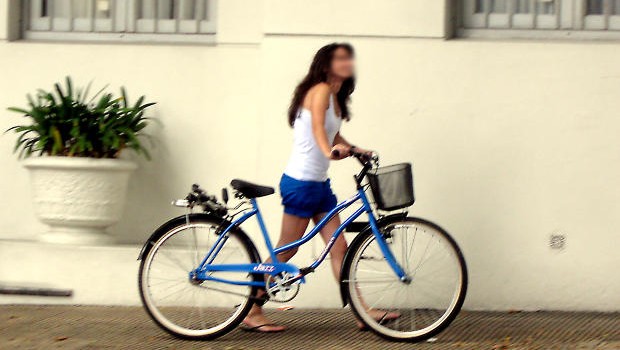 In the last few years, cycling has edged its way into the mainstream.  Many major cities, including London, now have bikeshare programs and new bike companies are springing up and growing.  However, the number of people cycling is still lower than most policymakers and advocates would like.  In the Netherlands, the gold standard for cycling participation, 27% of trips are made by bike. In Oxford, 10% of people cycle to work, while nationally, cycling accounts for just 2% of trips in the UK. These figures are even lower when the focus is on women.  Of trips that are made on a bicycle, just 30% are made by women and the trips they make are on average much shorter.

In an effort to increase the number of cyclists, cities are increasingly looking at how they can shape built environments.  And it’s here that there’s a great divide. In the Netherlands, separated cycle tracks – bike lanes that are physically divided from the street – run along most roads and are a key part of cycling infrastructure.  Those who favor cycle tracks argue that they encourage more people to cycle, and are safer for cyclists.  However, opponents of cycle tracks favour vehicular cycling, where cyclists ride in the road and behave like cars.  They argue that cycle tracks are more dangerous to cyclists because they hide cyclists from drivers, leading to collisions at intersections.

However, research has shown that cycle tracks are safer for cyclists, and well-designed intersections can reduce the risk of accidents. The practical example of New York City, which has embraced cycle tracks, also supports their use.  Beyond increasing cyclist safety, the tracks also correlated to a huge increase in retail sales.  Furthermore, cyclists want them.  Riders in a survey of Portland, Oregon agreed that separated bikes lanes made their rides safer.  Notably, drivers also favour cycle tracks, making them the most requested road safety improvement.

Cycle tracks are also important for ensuring that all transportation choices are equally available to all. As experiments like Vienna’s egalitarian urban planning efforts have shown, men and women use space in different ways, and women’s needs are often not at the fore when planning choices are made.  Looking specifically at biking, Anne Lusk has argued that the reluctance of the American Association of State Highway and Transportation Officials to endorse cycle tracks, despite supporting evidence, may be due to the fact that more than 90% of guideline authors were male.

Women, particularly queer women and women of color, already fight to be safe and respected whenever they leave the house and when women’s transportation needs are discounted their freedom in public space is further restricted.  The strongest factor in whether or not women cycle is their comfort, and women are more likely to feel comfortable on streets that have bike lanes, with separated bike lanes being more important to women’s feelings of safety than men’s.  The effects of change can be dramatic. In Los Angeles, California, the number of women biking on a street doubled after a cycle track was built.

Building cycle tracks won’t fix sexism, nor are they the answer to all transportation woes.  Cycling infrastructure shouldn’t be the only thing to be funded, and it needs be built in a way that’s sensitive to the history and needs of each particular neighborhood. Women who want to bike also face hurdles like finding the time to bike when they’re working a second shift at home and continue to assume primary responsibly for families. However, building cycle tracks and improving cycling infrastructure generally is a small part of building cities – and societies – that actively include women.

As the Oxford City Council examines how to achieve its goal of 20% all journeys to work being made by bike, good infrastructure and inclusivity will be key. Women have tremendous growth potential when it comes to cycling.  Between 2007 and 2011 the number of women commuting by bike in the US grew by 50%, and between 2012 and 2013 the number of women biking grew more quickly than that of men. When it comes to tapping into women’s desire to cycle, local surveys taken after cycle tracks have been installed have shown again and again that improving cycle infrastructure is a great way to tap increase the number of women riding, and increase numbers overall. The Magdalen roundabout is already being examined.  The Council might want to consider also taking a look at High Street, Manor Road, Longwall Street, and the intersection of Holywell Street and Parks Road as well.

The Web Officer ensures OxPolicy's website functions smoothly and continuously updates, in order to provide you with the latest content. This account automatically uploads some chosen material. If you see anything amiss, let us know through the contact form available through the top menu. Happy browsing!

About 6 hours ago from OxPolicy's Twitter · reply · retweet · favorite

Less than 24h to our panel @wadhamoxford! catch Dr Anna Matveeva @KingsCollegeLon and others on devt aid & good gov facebook.com/events/2698388…

Tmrw at @wadhamoxford - Ms Amy Dodd, Coordinator @UKAidNetwork will be on our panel for devt aid & good gov! 7.30pm facebook.com/events/2698388…

Thanks everyone who came yesterday! Next: panel on Dvt Aid and Good Gov, @wadhamoxford on Wed! facebook.com/events/2698388…