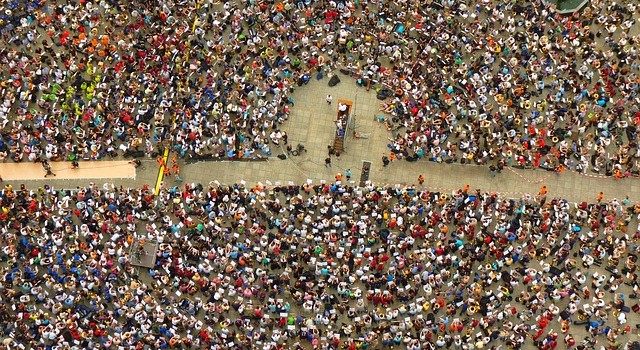 Thai politics has historically been a whirlwind of deference to the monarch, iconoclasm, military coups and dictatorships, and populist politics. Recently, the cycle seems to be perpetuating its tiresome self once again. Anti-government protesters have stormed the streets of Bangkok, occupying several governmental buildings, including the Ministry of Finance, their newly-commissioned headquarters, with the aim of overthrowing the government. They are led by one Mr Suthep Thaugsuban, an Opposition Democrat Party MP. His party is the arch-adversary of the governing Pheu Thai Party in parliament.

The conflict is more complex upon further inspection, and the battle lines are far more nuanced than mere labels such as ‘government’ and ‘anti-government’. The Opposition Party is in actuality, the Party of the Ruling Elite, the Bangkok industrialists, and the Military. The party of Government, Pheu Thai, is a party that was popularly elected in 2011, and is led by Yingluck Shinawatra, sister of Thaksin Shinawatra, erstwhile Prime Minister who has been indicted on corruption charges, and now serves out a self-imposed exile in Dubai, from which he is widely held to be running Thailand by proxy. The Shinawatra government is massively popular among rural Northern Thais, who benefit tremendously from the populist economic policies, particularly in agriculture that it espouses.

The current fiasco was sparked when Prime Minister Yingluck attempted to pass an Amnesty Bill that would pardon Thaksin, as well as many other supporters of his regime that were convicted of charges during the street protests in 2010 against the (undemocratic) Democrat government who has ousted Thaksin’s government in 2006.

This face-off raises important philosophical questions. When is it justifiable to use civil disobedience, street protests and popular force to impose the peoples’ will on governments, if ever? In the wake of the Arab Spring, popular protests and dramatic revolutions against the incumbent have been valorized (at least until Syria), and treated as expressions of the sovereign will.

The problem however, lies in the long-term, when the reliance upon force to control the agenda and direction of a government becomes the norm, rather than the exception. When endless cycles of coups, revolutions and depositions become the supra-arching trend of political development (see: Egypt, Turkey and of course, Thailand). Yet, there still seems something deeply unsettling about giving up our right to protest. Surely men like the Mahatma Gandhi, Reverend Martin Luther King Jr. and their luminary peers struggled heroically in their quest against a monstrous and entrenched institution. And surely, if we lose our right to protest, then we lost our fundamental democratic freedoms as well.

Perhaps the subtle difference in the historic struggles for freedom that are rightly revered in our collective memory, and the tiresome and violent revolutions and counter-revolutions of dysfunctional states, lies in the alternative. Gandhi and King faced administrations that were unrepresentative of their people, and actively oppressive, providing no institutional alternative for recourse. Suthep, Field Marshal Tantawi in Egypt in the coup against Muhammed Mursi, and the Turkish military on many occasions, have overthrown elected governments with a popular mandate.

This is admittedly, a crude, and often, ambiguous line to draw. Elected governments can morph into power-consolidating administrations, which make institutionalized alternative views impossible. The difficulty lies then in determining at what point they have crossed this Rubicon, and therefore at what point they may by force be taken to task. Context is everything.

While political discernment in these matters may seem like a pipe dream, it is worth considering that if such principles were observed rather than what often motivates coups and revolutions, such as entrenched interests, power-hungry plutocrats, and hawkish generals, decisions about whether or not to protest would certainly be more deliberative and reasoned.

Yingluck has shaken off some moral opprobrium by choosing not to engage the protestors by force, and continuing the run the country as usual. The leaders of the Democrat party however, are bifurcated over the question of whether or not to support Suthep, and while the Police have responded with an affirmative, all now hinges on whether the Army will back another coup as it has done countless times in Thai history, but refrained from doing in recent times.

This writer is not a supporter of the Thaksin regime, or of its populist economic policies; however, Suthep’s call to boycott even snap elections offered by Yingluck, and establish a ‘Peoples’ Council’, suspending the constitution for over a year before the next bout of elections, is a gross hijacking of the democratic process. Good sense for Thailand must prevail, with lasting institutional change in the way politics is conducted to boot. Perhaps the lesson from Thailand today is that often, with a healthy dose of political acumen, the bravest and most sustainable catalyst of reform, is to stay the course; and not waylay it.

A History and Politics Student at Balliol College, passionate about international humanitarian law, social policy, crime and social conceptions of it, as well as cultural identities and movements.