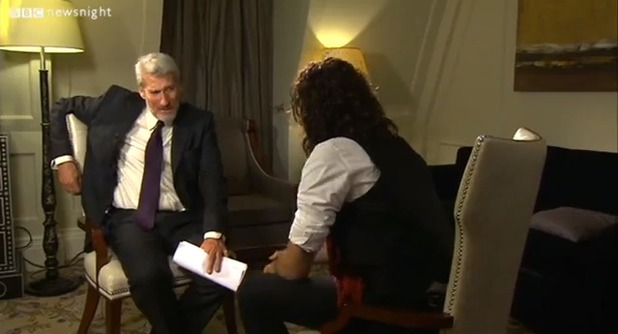 Voting apathy is justified. But it can lead to political apathy, which is self-defeating and could be dangerous in the long term.

It was a heavyweight interview with Jeremy Paxman that has been viewed millions of times and received fierce criticism from much of the UK national press. On Newsnight, Russell Brand argued that voting “doesn’t make a difference”, and instead a “revolution” will be required to deliver an alternate political system willing to deal with global economic and environmental problems. His words have resonated with large numbers of the young, only 35% of whom voted in 2006, and the disadvantaged, whose voter turnout trails behind the top income group by 20%. These “disenfranchised” groups complain of seeing no policy changes resulting from their vote; for them, their concerns are not addressed whether it is Labour, the Conservatives, the Liberal Democrats or any other party in power. In his New Statesman essay, Russell sums it up with this point:

Apathy is a rational reaction to a system that no longer represents, hears or addresses the vast majority of people.

Is he right? If you are told to pick between three identical oranges, you can pick one on a whim, or allow someone else to choose for you – it all comes to the same outcome from your perspective. When you have a choice between three identical parties, you can in a similar fashion allow somebody else to make the choice for you – they go to the poll; you do not. The result, for you, remains the same. In this narrow sense, Brand was right – if you vote to advance your interests, the act becomes pointless when your choice makes no difference to the overall outcome.

This is of course an exaggeration of the current circumstances – despite a marked gravitation towards the economic centre ground on the part of Labour and the Conservatives, a clear difference remains in ideology and in strategy. Yet on climate change – the area where Brand argues radical change is most sorely needed – both parties have an ambiguous party line, with Ed Miliband speaking out against energy prices, Cameron declaring the “greenest government ever”, yet both willing to support fracking. The disenfranchised might argue that no party is “radical” enough in the areas of climate change and income inequality – those areas which really matter to them.

On the other hand, perhaps the very idea of voting to advance your own interests – voting rationally – is objectionable: we should vote on the basis of advancing the common good of all. A change in government might make improve the lot of the “squeezed middle”, or protect minority rights more vigorously. If voting is an ethical as well as a pragmatic matter, there is a strong case for voting even when your particular interests are not affected by the outcome. Still, many non-voters see the political system we have today as nothing more than an instrument of exploitation, controlled by and meeting the needs of a small, wealthy portion of society. If voting is regarded as compliance with such apparent exploitation, then non-voting becomes conscientious objection, a non-action also justified on ethical grounds.

Overall, Brand, and the people he wishes to represent, may be justified in the decision not to vote. Most of the disenfranchised, however, disassociate themselves with the political system altogether. Not only is this self-defeating – putting forward representatives of their own for election would be the first step to bringing about the radical change they want – but the government should be alarmed at the complete disengagement of citizens with politics.

Firstly, there is still the need for citizens to hold their local officials to account. Secondly, government cannot afford to turn off valuable potential employees, but bad company image makes the recruiting pool smaller. Thirdly, disaffection with national politics risks giving the person a spoiled view of the general practice of politics. Participation in the politics of any organisation – student societies, town halls, clubs, interest groups – exposes the person to the views and requirements of other people, encourages them to see the interests of the other as just as valid as their own, and ultimately forces them to compromise. When these skills of sociability begin to be lost among disengaged populations, the only winners are the sorts of political parties that thrive on the demonisation of certain social groups.

Much has been debated on strategies for increasing voter turnout – from moving the day of voting, to opening more polling stations, to allowing people to vote by text. But genuine, responsible and meaningful participation in national politics involves more than a vote cast every five years. It is in the interim period – where the voter continues to engage with people from other walks of life, learns to compromise, and looks at the different sides of a policy issue – that a true political stance is formed, and as a result an election vote can be made responsibly. If anything, making votes easier or even compulsory carries the risk of “polluting” the vote count, with more votes cast irresponsibly or on a lack of information.

Instead, it should be recognised that voter apathy is symptomatic of an attitude that is perfectly defensible, but which can lead to general political apathy if the disengaged do not have other ways to influence national policy. E-petitions and budget scrutiny have been minor efforts at opening up more avenues for participation, but more should be done on the local government level, where the trend has been towards larger units of authority, and contracting out services to unaccountable private enterprises, increasing efficiency in some areas but exacerbating the problem of local disconnection from the public. If that is insufficient for the disaffected, who may ultimately desire radical change of the political class, this will only come about peacefully by electing different candidates (and if need be different parties). If Russell Brand and the “disenfranchised” are committed to that, the answer is not apathy, but active engagement.