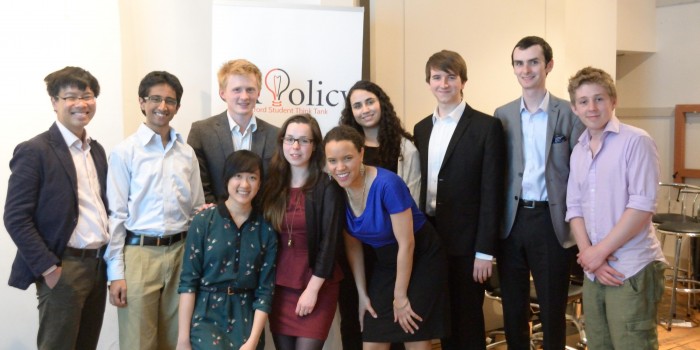 My name is Justine Rughooputh and I am the Secretary for OxPolicy for Michaelmas term 2013. My reasons for getting involved with OxPolicy were quite simple. I have always been interested in policy, but when attending the Freshers’ fair in 2012 I realised that most of the societies in this area were party political societies, such as OUCA and OULC. I wasn’t particularly interested in joining either of these so I focused on other societies.

When we received an email about OxPolicy at the end of Hilary it sounded more my kind of thing; different focuses each term with the first being immigration, something that was very much in the news at the time and which I had an interest in, so I went along to the first meeting. With OxPolicy there is always a purpose. You are researching a topic you find interesting, you are writing a report or you are organising a speaking event. Though everyone is very friendly at OxPolicy, the meetings move quickly and have direction.

Organising our first event was both fascinating and hectic. Maeve (the current and former director) and Grace (the former co-director & current US Blog Editor) were fantastic at bringing the best out of the team when researching for the report, and also in their editing of it. The whole committee put a lot of effort into arranging some brilliant speakers. We learnt a lot from the first event which I’m sure we will use in the future; for example we may look for a wider range of political views and perhaps leave more time for the question and answer session from the audience.

I am really looking forward to Michaelmas term. Having two separate topics- the EU and Human Trafficking means that there will be something for everyone. As a law student both topics were of interest to me but I have decided to work on the Human Trafficking side because it’s a topic that doesn’t get enough attention in the UK. I think that’s one of the best things about OxPolicy; over the coming terms we want to draw attention to different policy issues. Some, like the EU, are big issues where many of the issues (though perhaps not the answers) are often obvious. We also get to focus on issues like Human Trafficking; something rarely seen on the news and rarely acknowledged as a problem in the UK.